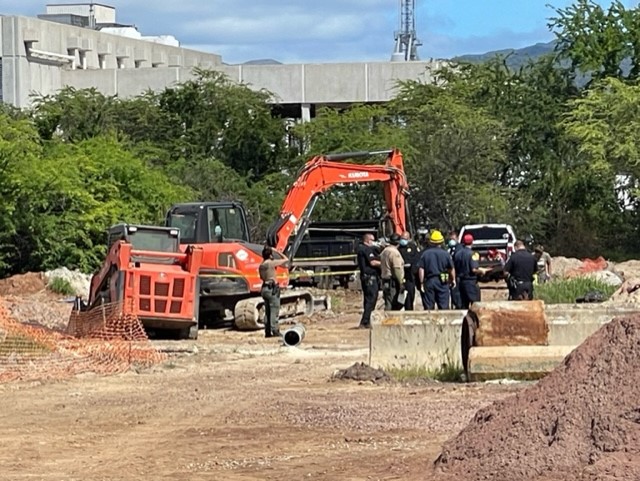 HONOLULU (KHON2) — A worker has died while working on the Sand Island sewer improvement project, according to the Department of Lands and Natural Resources (DLNR).

Honolulu EMS said the man was 23 and working on a construction site when he was covered in dirt in the trench behind a baseball diamond at Sand Island Parkway.

Get the latest morning news from Hawaii delivered to your inbox, sign up for News 2 you

A detective at the scene confirmed that the contractor was actively working on the scene and that a man was inside the trench when it collapsed. The contractor had worked on the Sand Island sewer improvement project.

An officer from the DLNR Division of Conservation and Resource Enforcement responded, but the investigation is being conducted by the Honolulu Police Department. An investigator from the Hawaii Occupational Safety and Health Division of the Department of Labor and Industrial Relations was also at the scene.

The Honolulu Fire Department (HFD) said a 911 call was received just before 10 a.m. Saturday, Jan. 29 for a man who was trapped in a collapsed trench near the Sand Island baseball fields.

When HFD arrived they said the man had been pulled from the trench and a bystander had started CPR. HFD took over until the EMS arrived around 10:15 a.m.

Witnesses at the scene told officials all they could see was the man’s hand and they were able to get him out of the trench in five minutes. EMS rushed him to hospital in critical condition, and the DLNR confirmed his death was around 12:30 p.m.

the Sand Island Sewer Improvement Project began in April 2021, and according to a press release sent by DLNR, it was supposed to take seven months.

Additionally, the DLNR added that at the time the Hawaii Department of Health had issued several sewer spill violations in the area over the past three years. Sewer improvements were aimed at deteriorating infrastructure. The project included a new pumping station, toilet block, sewer lines and connecting sewer lines.