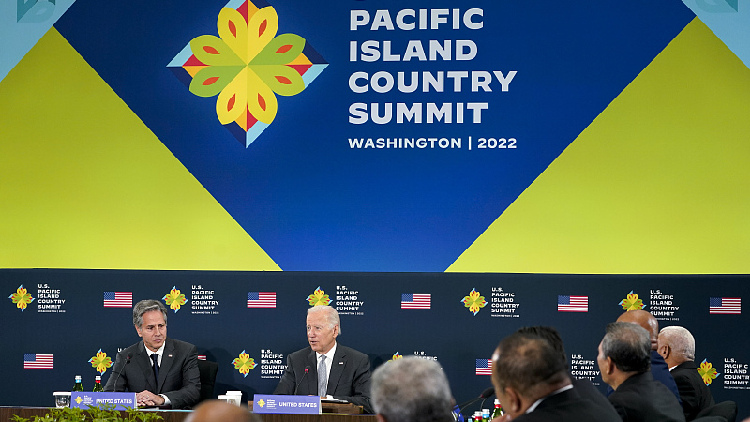 Editor’s note: Sourabh Gupta is Senior Asia-Pacific International Relations Policy Specialist at the Institute for China-American Studies in Washington, DC The article reflects the views of the author and not necessarily the views of CGTN.

It is not surprising that a country which has nearly three times as many military bases as embassies and consulates sees the signing of an agreement by a State within its sphere of influence with a great power counterpart in the prism of geostrategic competition. For a hammer, everything looks like a nail after all.

And that was the case when the Solomon Islands signed a security cooperation agreement with China in early spring to allow Chinese law enforcement to support the Solomon Islands National Police to protect the projects of Chinese investment on the islands, as well as facilitating the rest and resupply of Chinese Navy ships in port. The deal was smeared by Washington as an example of “checkbook diplomacy” and the resupply facility was mischaracterized as a naval base that would host a permanent military presence. It should be noted in this regard too that the capital of the Solomon Islands, Honiara, in November 2021 witnessed some of the worst rioting in many years, despite decades of (clearly below average) training of forces. policing by the Australian Regional Assistance Mission to Solomon Islands (RAMSI) under the Solomon Islands-Australia Security Treaty.

In the months that followed, the Joe Biden administration reinvigorated its own diplomatic relations, sending official delegations to Pacific island countries, announcing plans to open embassies in the Solomon Islands, Kiribati and Tonga, and organizing a “Partners in the Blue Pacific” event. with “like-minded” mini-lateral partners on the sidelines of the just-concluded United Nations General Assembly (UNGA) session. The icing on the cake so far is the first United States-Pacific Island Countries Summit, hosted by the White House on September 28-29.

At the first U.S.-Pacific Island Countries Summit, the discussion focuses on both the security and non-security challenges facing these small island states. In keeping with past form, the security component and the minilateralist impulse of the “little clique” overshadows the other outcomes of the summit. From a security perspective, the U.S. goal is to improve the maritime domain awareness capabilities of Pacific island nations – lest Beijing step in and provide that capability!

And from a technology and connectivity perspective, the goal is to increase Pacific Island nations’ communications links with U.S. regional allies and partners (Japan, Australia, New Zealand, and India). through undersea cables – lest Beijing develop these data and connectivity links. The telecommunications needs of Pacific Island countries are also being met through “friendly” providers. 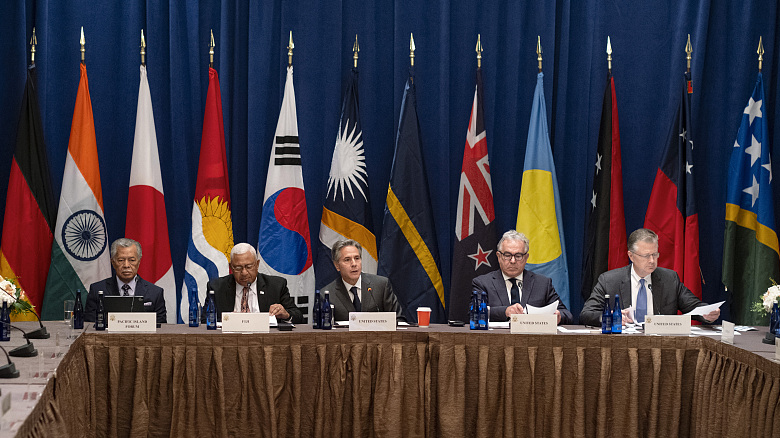 All in all, the first U.S.-Pacific island nations summit is shaping up less as a Washington effort to engage those island states on their key unconventional development and security challenges, such as climate change, than to counter the growth of Beijing influences regionally and encloses these states in the Western sphere of influence. Geopolitics disguised as development is mostly on the agenda.

And given the geographic remoteness of these Pacific island states, as well as the range of existing US global engagements and Washington’s inability to compete head-to-head with Beijing for the loyalty of these states from an economic and development perspective, the plan is to “tread-in” a coterie of “like-minded” countries to strategically coordinate aid to these island states in the face of competition with China. Washington’s agenda is to establish dependency on the West among these “second island chain” countries strategically located in the Western Pacific, rather than listen carefully to their development aspirations.

As Retno Marsudi, Indonesian Foreign Minister and host of this year’s G20 summit, observed during his UNGA plenary session earlier this week, mini-side groupings in Asia-Pacific have ceased to serve as a cornerstone of peace and stability and have instead become a tool of confinement and alienation. The “Blue Pacific Partners” grouping and the impetus behind the first United States-Pacific Island Summit fall into this category of activity. The regional architecture of the Asia-Pacific region will therefore be poorer.

If an “America First” US president and persuasion of climate change denial comes to power in 2024 or 2028, it is difficult to say that this level of attention and commitment will be sustained.

As for China, rather than waiting interminably for a win-win opportunity to work with Washington in the South Pacific, it should untangle defined areas of cooperation on climate change and conservation projects with Australia’s Labor governments. and New Zealand.