This story was originally published by the Santa Barbara Independent and is reproduced here in partnership with Edhat.

By Tyler Hayden of The Independent

The UC Santa Barbara PR machine has stepped up a gear to defend the university’s proposed Munger Hall dormitory, releasing a statement Thursday that highlights the expected benefits of the controversial, hyper-dense building concept while acknowledging its small, windowless rooms “may not be for everyone. Designer and funder Charlie Munger has also rebuffed the intense criticisms leveled at him by architects across the country, calling his critics” idiots ”and claiming in an interview with Architectural Record this week that those who actually study his models“ are laughing at them ”.

The drawbacks of living in a 10ft by 7ft windowless space would be offset by an attraction to large playrooms and dormitory study rooms as well as on-site amenities, such as a market, bakery and more. fitness center, Munger told the magazine, explaining, “It’s about the happiness of the students. We want to keep the suicide rate low.

Munger, billionaire vice president of Berkshire Hathaway, who is partially blind and has described architecture as “some kind of hobby,” said he just doesn’t see the problem with single, windowless rooms. “It’s quite bearable, especially with good ventilation,” insisted the 97-year-old. “Nobody worries about going to the basement bathroom and peeing because there is no window.” Munger is donating $ 200 million for the estimated $ 1.5 billion project on the condition that his plans are followed precisely. He worked with VTBS Architects in Santa Monica to draft the plans. An opening date is tentatively scheduled for 2025.

The UCSB statement, printed in Q&A form with former vice-chancellor and project leader Gene Lucas, says Munger Hall which would house 4,500 undergraduates at the far end of campus and at 1, 68 million square feet would be considered the world’s largest dormitory – was envisioned “for students who want the experience of living together and co-living, but who also want the privacy of a single room.” Those who aren’t drawn to the idea might live in the university’s other dormitories or in off-campus apartments, it says. Critics point out, however, that many students will have no choice but to reside at Munger Hall, given the school’s severe housing shortage and record availability of off-campus options in Isla Vista and others. neighboring communities.

Windowless rooms (about 94% of units) would have “virtual windows” with a “circadian rhythm control system fully programmed to substantially reflect the lighting levels and color temperature of natural light throughout. throughout the day, ”the statement continued. The concept is inspired by the artificial portholes in the cabins of Disney cruise ships. Fresh air would be pumped by a powerful ventilation system and natural light would be available in common areas and kitchens. “We anticipate that when not in class, at the library, or participating in activities on campus, students will spend most of their daylight hours in these common spaces rather than in the sleeping areas,” says the Q&A.

In response to opponents’ initial descriptions that the 11-story building will only have two entrances and exits, UCSB clarified that Munger Hall will in fact have 15 smaller access points around its perimeter. “Exits and exit stairs are designed to meet and exceed fire, life, security and building code requirements to ensure a safe and prompt exit from the building,” the university said. “In addition, computer mass motion models of different emergency scenarios were run to ensure that building exit times under emergency exit conditions are acceptable.”

Munger Hall garnered national attention this week with inspiring articles and editorials in the New York Times, Los Angeles Times, VICE, Slate and USA Today as well as news segments on NBC and CNN after the Santa Barbara Independent reported one of its consulting architects had resigned to protest the dormitory’s massive size, lack of windows and extreme density. Paul Goldberger, architecture critic for The New Yorker, called the plans a “grotesque and sick joke – a prison masquerading as a dormitory.”

In a separate interview with CBS MarketWatch, Munger again shrugged off the controversy, suggesting that the pushback was not based on alleged flaws in its design, but on its vast wealth. “You have to get used to the fact that billionaires are not the most popular people in our society,” he said. “I’d rather be a billionaire and not be loved by everyone than not have any money.” Munger has already donated $ 65 million to UCSB to develop a spacious residence for visiting physics researchers and donated the 1,800-acre Las Varas ranch to the university. 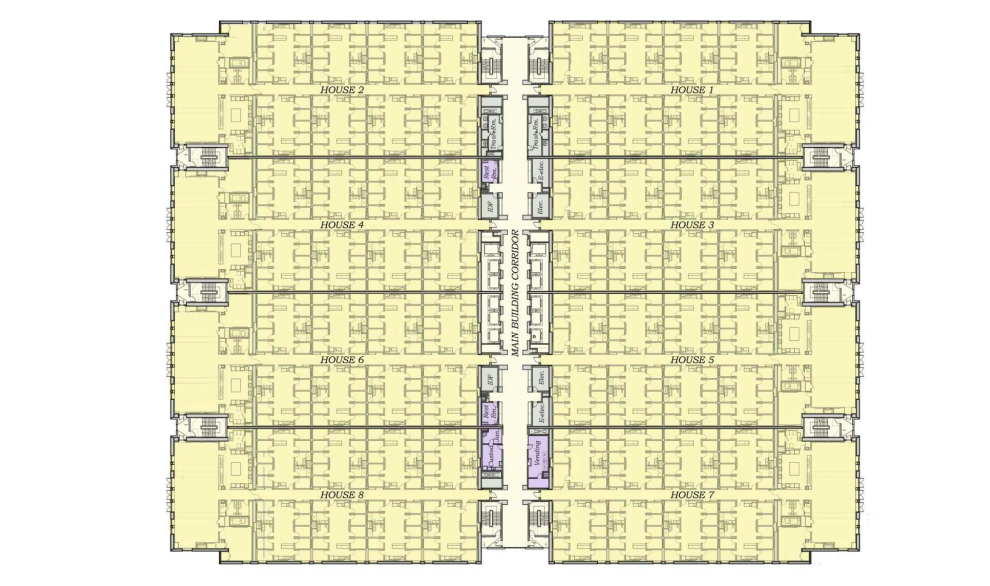 Each residential floor is divided by a single interior corridor branched off by smaller corridors. | Credit: Courtesy

Also this week, a group of six professors of architectural history at UCSB started a petition to stop Munger Hall from moving forward. Like other experts who have spoken, the group objected to the dormitory’s “windowless little cells” and complained that no research had been presented on the potential psychological effects of such a design “ radical ”would have on its inhabitants. The petition which has garnered more than 1,700 signatures, including those from renowned architectural historians across the United States also calls into question the favorable comparisons made by UCSB between the dormitory and another of the Dormitory projects. Munger mostly windowless, the Munger Graduate Residences at the University of Michigan.

“The two buildings are very different,” said the group of professors. “Munger Hall in Michigan is aimed at graduate students, is less than a quarter the size (380,000 square feet vs. 1,680,000 square feet) and offers about one bathroom for each room, while the behemoth designed for UCSB undergraduates only offer two bathrooms for eight bedrooms. (And the man-made windows are just as unpopular in the Michigan dorm as one might expect.) “

In an interview, Richard Wittman – one of the petitioners who studied at Yale and Columbia and is currently an associate professor in the Department of Art History and Architecture at UCSB – said that ‘There might be some validity to some details of Munger’s concept, at least in theory. “Maybe,” he said. “But let’s test it first. Let’s see some data. As it stands, the project is essentially an unprecedented $ 1.5 billion experiment. “If this was another project, you would be laughing at the audience for coming up with something on this scale without any research,” he said. Wittman also called out the UCSB public affairs department, which praised Munger’s “global” and “astonishing” vision, to sometimes sound “like the official organ of a totalitarian state.”

Wittman and his colleagues were quick to note that their opposition to Munger Hall should not be interpreted as a denial of the gravity of the UCSB and Santa Barbara housing crisis. “This crisis, however, is to a large extent the result of UCSB’s failure to deliver on the housing construction promises it made in its 2010 long-term development plan,” they said. . The proposal looks like a “deus ex machina program that aims to accomplish in one building what the university has neglected to do over the past 12 years”.

This Friday, the Santa Barbara chapter of the American Institute of Architects expressed its own opposition in a letter to Chancellor Henry Yang, who also described Munger’s plans as “inspired and revolutionary.” “As architects,” the letter read, “it is our responsibility to positively design the built environment in a way that supports the health, safety and well-being of building occupants, respect the natural environment and improve the community as a whole “. The chapter considers “unequivocally” that Munger Hall does not meet any of these standards and that there is “no justifiable reason to continue the project as proposed”.

Meanwhile, Tommy Young, a fourth-year UCSB student with a double major in economics and geography, created his own petition against the dormitory that drew nearly 10,000 signatures. Young said he was inspired to do so when he learned that Munger’s designs had already received the UCSB seal of approval, but without public scrutiny. “I really want the voices of the community to be heard on this,” he said. “Students, alumni, parents, future students, they should all have their say. They should all have their say.

Young was particularly disgusted by Munger’s deviation that critics are simply concerned about his wealth. “It’s dishonest,” he said. “No, people aren’t crazy because you’re rich. People get angry because you force a design on them that they don’t agree with, and you’re not ready to budge.

Young noted that few, if any, outside UCSB and Munger Camp were in favor of the project. “You don’t see any petitions pushing for approval,” he said. He also questioned Munger’s prediction that tiny bedrooms would attract students to larger common spaces. Young’s own residence has small rooms, he said, and his common areas are still dead zones. “UCSB needs to go back to the drawing board on this one.”

Although UCSB has approved Munger’s plan, it has yet to be reviewed by the California Coastal Commission and UC’s Board of Regents, where there will be opportunities for public comment. “I hope the administration is listening,” Young said. “But who knows.”

Find all of our Munger Dorm stories at Independent.com/munger-dorm.