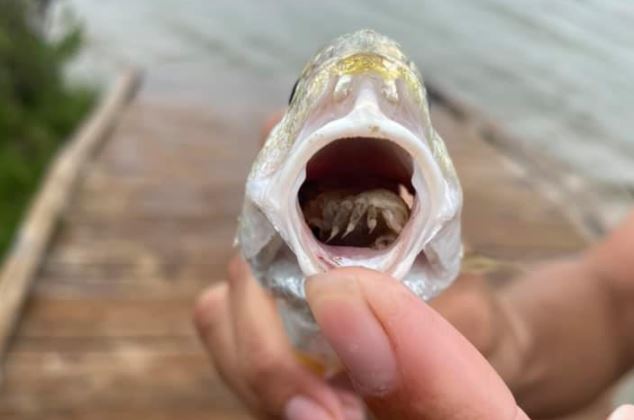 The unsuspecting fish, an Atlantic Croaker, had fallen victim to a rare parasitic isopod known as the tongue-eating louse. The parasite usually invades a fish through its gills, clings to its tongue and ends up (a little) replacing it.

After clinging to a fish’s tongue, the parasite drains its blood, eroding all of its muscle tissue before leaving only bone. The parasite then attaches to the bone, feeding on nutrient-rich mucus and sometimes fish food scraps, according to Kory Evans, a fish biologist and assistant professor at Rice University.

Evans encountered tongue-eating lice while studying the shape of the skull in fish. He specializes in creating 3D reconstructions of fish skeletons that help explain their evolution. About two or three times he found a surprise visitor in the mouth of the skulls.

These parasites are common in the Gulf of Mexico, according to Evans, and have been found in marine life as early as the 1970s. There are different species of these creatures all over the world, he added.

With the exception of hindering a fish’s ability to eat food, a parasite does not affect it much, and a fish can live with a fish until it dies. The lifespan of a fish would be exceptionally shortened if it fell victim to more than one of these parasites. Since they would take up so much space in the fish’s mouth, it would be unable to swallow its own food.

“They would starve and only have a few weeks,” Evans said. “But fish are as hard as nails, often they don’t go down easily.”

For an avid fisherman who asked about removing the parasite, Evans said it was perfectly fine. Parasites don’t affect humans, and by removing one from a fish’s mouth, “you are doing it a favor.”

A Beginner's Guide to Traveling the Caribbean