The best places to visit for sailing enthusiasts

Eenjoy the whip of the wind in your hair, bask in the warmth of the sun pouring down your face and sail across the turquoise expanse of the sea at your leisure: Really, nothing spells freedom like the experience of those who go on a sailing vacation.

Imagine dropping anchor in picturesque bays, snorkeling in refreshing waters, and snorkeling with sea creatures. Or sit on the deck to sunbathe while you soak up the breeze and think about the next enchanted place to visit. You can end the day gazing at the uninterrupted horizon or in the starry sky, the gentle lapping of the waves lull you to sleep.

It is the idyllic life that takes sailing enthusiasts to the waves, on their way to the adventures that await them. As well as taking control of a magnificent boat and heading for that next getaway, it’s the best sailing spots and the experiences they bring that keep the most demanding sailor away from shore.

Below are some highly recommended destinations for all sailors and sailing enthusiasts.

Part of the Cycladic Islands resort in the Aegean Sea, Mykonos is a top destination on the bucket lists of many discerning travelers. It offers some of Greece’s most amazing tourist destinations, but discovering it by sea gives a whole different Mediterranean holiday feel, especially during the charter season from March to November.

This idyllic island is the ideal starting point for a cruise in the Cyclades or among other Greek islands. The beaches of southern Mykonos are private and secluded havens for swimming, snorkeling among fish, or swimming to shore to meet locals and tourists. The island’s beaches also offer an interesting and eclectic collection of waterfront bars, serving authentic Greek cuisine and cocktails. The region, like the rest of the Cyclades, is prone to strong winds, making it perfect for the more avid sailor looking for a little excitement.

Some of the highlights to enjoy on a Mykonos sailing itinerary include visiting stunning coves and bays such as those of Delos. Thrill seekers can also enjoy water activities such as kitesurfing and windsurfing. Naxos, the largest island, is a perfect place for this.

Next is Paros, which boasts of its Golden Beach. For a quick traditional Greek lunch that could continue into an overnight stay, islands such as Sifnos, Serifos, Sporades, Kythnos, and Syros provide welcoming havens of peace. Meanwhile, further south is Milos. This island has one of the largest closed ports. It also offers spectacular coves and beaches that are only accessible by yacht. The southern coast of Kleftiko features a popular volcanic rock formation. 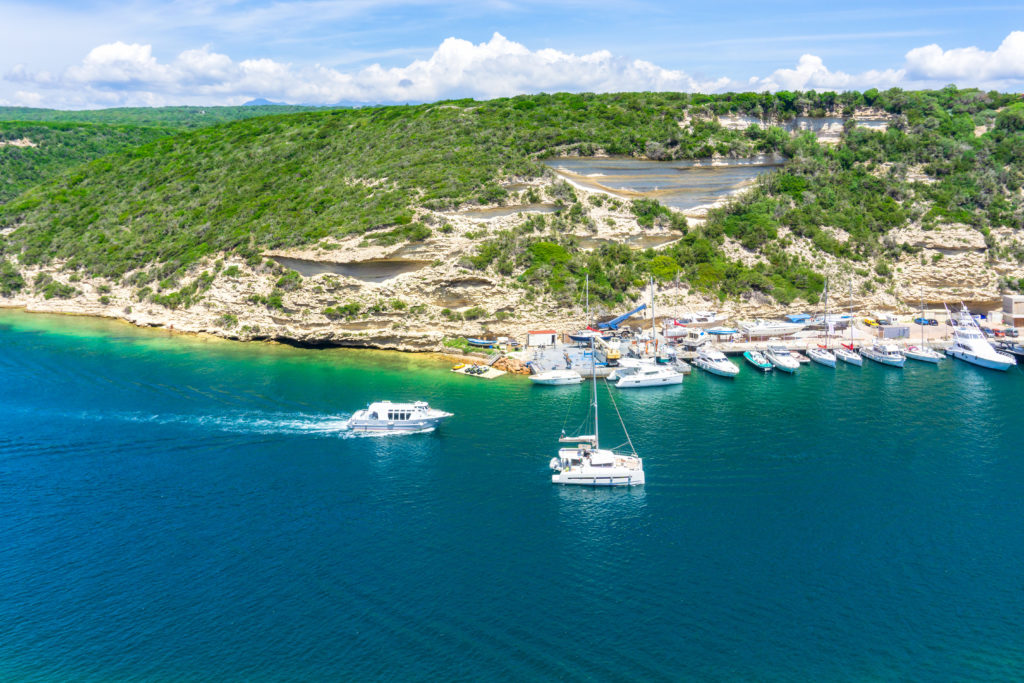 The fourth largest island in the Mediterranean Sea, just north of Italian Sardinia and separated from it by the Strait of Bonifacio, is the French island of Corsica. The island is known for its “emerald green heart” as its mountains offer tourists indescribable shades of green through the ferns, oaks and pines of their forests. The interior also offers picturesque landscapes and waterfalls, as well as its many charming French Mediterranean towns.

However, to truly experience Corsica is to move away from its shores to reach the dreamlike sea. The area is dotted with small islands and coves, which can be explored by yachts and catamarans. One of the most breathtaking and imposing views in the region is the cliff of Bonifacio, which appears to have a picturesque town growing out of its rock formations.

One of the best shipping routes near Corsica crosses the Strait of Bonifacio, which has many charming islands and interesting rock formations. For sailors, precise navigation is a must here, as some islands have hidden underwater rocks and reefs.

Corsica is a perfect starting point for other islands, such as Razzoli with its bay of Bala Lunga or the bay of Cala Giorgio Marino. These offer amazing rock formations that emerge from the sea and provide great places to anchor and dive in the clear turquoise waters. The island’s lighthouse, built in the 19th century, is also a must-visit, offering a unique view of Corsica and Sardinia. Other islands to explore are Budelli, Santa Maria and Spargi. The latter offers three welcoming berths, and one, Cala d’Alga, offers a beautiful place for a refreshing swim.

Sailing near Corsica is perfect from April to October. The experienced sailor can take advantage of his west coast with his welcome challenge of westerly winds. 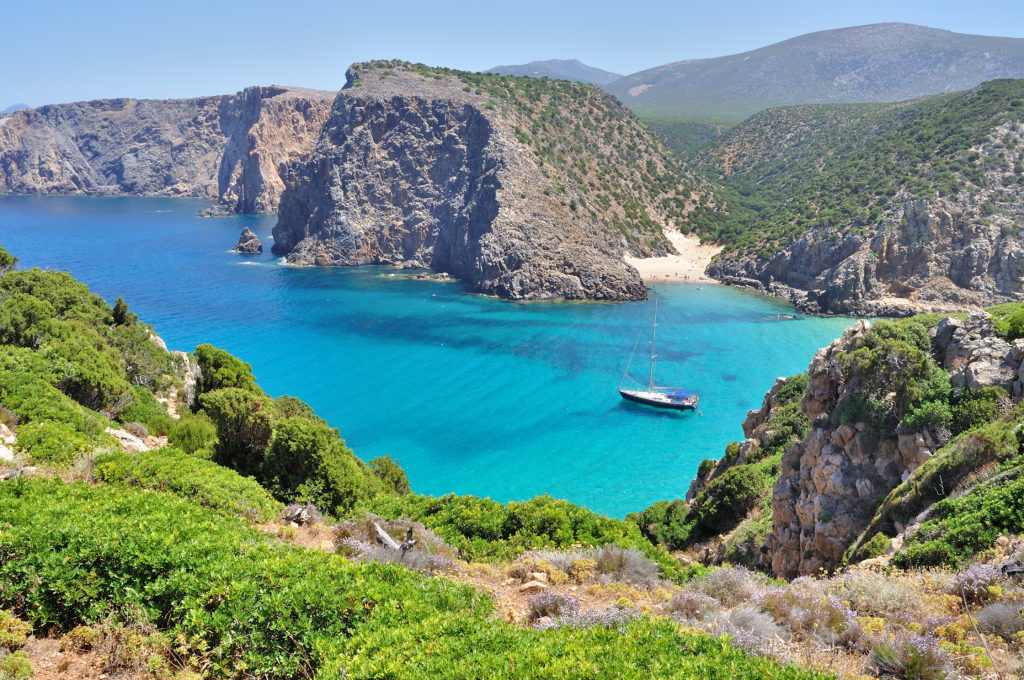 Across the Strait of Bonifacio from Corsica is the second largest island in the Mediterranean, Italian Sardinia. Unmistakable for its highest peak, the magnificent Punta La Marmora, in Sardinia, is another popular destination for sailors, skippers and water sports enthusiasts.

The island’s scenic coastline is a sight to see in itself, with its rocky shores and white sand contrasting brilliantly with the emerald blue sea. However, the real adventure lies in the Sardinian waters, where expert boaters can hone their navigation skills.

The island has many pristine beaches and places better accessible from the sea. One of the most popular is Emerald Beach or Costa Smeralda. There are also hidden bays, like the Costa Paradiso and the Costa Verde on the Gulf of Gonnesa.

For more secluded and unspoiled islands, sailors choose to head north to Arcipelago di La Maddalena National Park. The port town of La Maddalena offers pleasant views and sumptuous local cuisine. Then, exploring the charter area takes sailors to islands such as the famous Caprera, the uninhabited Spargi and the pink sand beaches of Budelli.

The sailing season for Sardinia runs from May to October, with ideal conditions for experienced sailors. 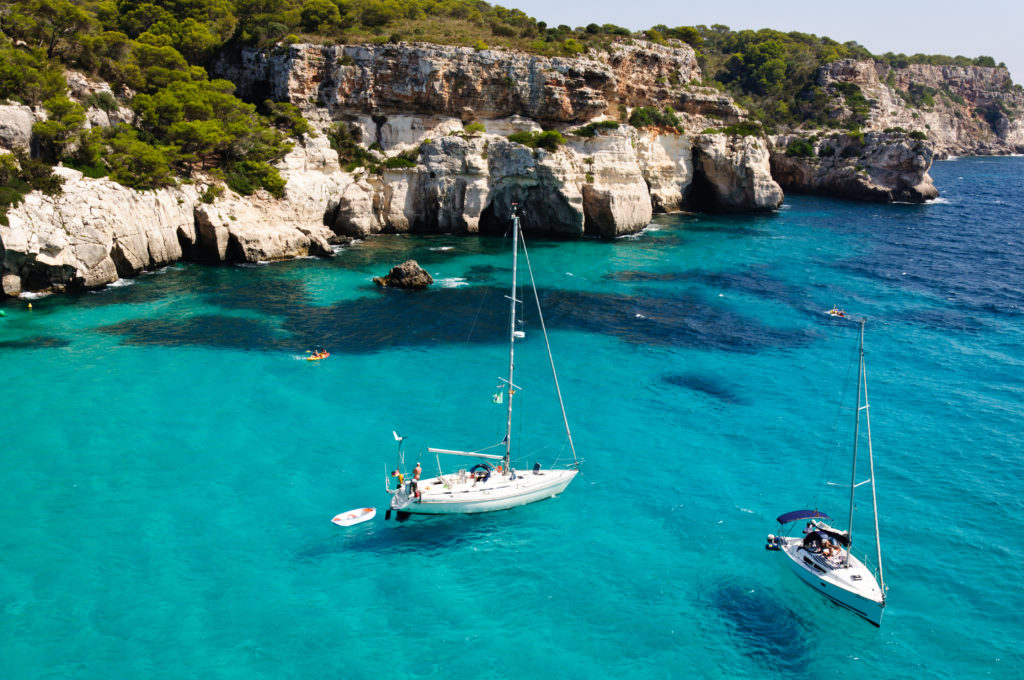 An archipelago off the east coast of Spain, the Balearic Islands are well known for their larger islands, such as Formentera, Ibiza, Mallorca and Menorca. These Spanish islands are popular with celebrities and discerning travelers. They are also destinations for avid sailors, who swear that the best way to explore this Spanish paradise is by boat. The Balearic Islands enjoy a mild climate all year round; tourists flock there to enjoy it.

It’s easy to get lost in the Balearic Islands, but not in the negative sense. The gentle winds make for a leisurely cruise, and the weather makes the trip here so serene that the sea enthusiast can opt for an extended stay. Meanwhile, the winds only pick up every now and then, with calm waves, which is ideal for novice sailors, who are further rewarded with the sparkling blue coves, hidden bays and pristine beaches that abound in the whole region.

Meanwhile, the islands themselves offer tourists at anchor something to enjoy; some activities include hiking through the Serra de Tramuntana mountain range, wandering through the old town of Port Mahon, discovering hidden coves in Menorca, partying in vibrant Ibiza and the sights and sounds of Formentera.

The uninhabited Cabrera Archipelago Maritime Land National Park hosts a night’s respite, while Sa Calobra offers magnificent views of its cascading cliffs from the water. To the east is Menorca, with its coastal town of Ciutadella, famous for its medieval streets and ancient architecture. As the sun sets, sailors can head to a hidden gem, Cala en Turqueta, which offers stunning sunset views.

The best time to sail in the Balearics is from June to August, but the weather is favorable all year round and sailors can enjoy trips from April to September.

As frequent travelers with the urge to travel would say, there are many ways to experience paradise. By sailing to these destinations, sailors can experience popular places from a different perspective. After all, there’s nothing quite like cruising high tides and cruising turquoise waters with that exciting promise of anchoring in a picturesque, dreamy location. So put on your captain’s hat and set sail for paradise.