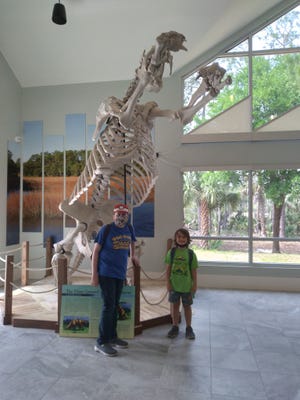 With its sea forest and salt marshes, Skidaway Island State Park may look like a prehistoric jungle from “The Lost World.”

Walking along its winding paths, one could easily imagine a duck-billed hadrosaurid slowly poking its head out of the damp brush. If you can’t help but imagine dinosaurs roaming the woods of the island, then you might be thrilled to meet one of the true giants that lived in these areas not too long ago ( geologically speaking).

Inside the park’s interpretive center, among stuffed animals, birding stations, and reptile tanks, stands a towering example of Savannah’s prehistoric wildlife. One of the island’s earliest inhabitants was the Eremotherium, or giant ground sloth, which roamed the Savannah region more than 10,000 years ago.

Following:It’s so Savannah: What’s up with the graves on the runway at Savannah/Hilton Head Airport?

This Ice Age herbivore stood 20 feet tall, weighed 3 to 5 tons, and is a cousin of the smaller sloths currently living in the rainforests of Central and South America.

The first giant sloth found in North America was actually unearthed on Skidaway Island in the early 1800s, which greatly surprised the scientific community because up until that time it was believed that the giant sloth only lived only in South America.

After inhabiting Savannah for over 2 million years, no one really knows why they finally died out. Was it climate change or were they driven to extinction by the Paleo-Indians? That would have been one hell of a steak!

Following:It’s So Savannah: This Secret Castle In The Woods Was Once Filled With Explosives

A skeletal replica of this imposing creature has been installed in the interpretive center as an impressive example of the wide variety of life that once existed in southeast Georgia. The skeleton is an exact replica of the giant sloth from the Smithsonian’s Museum of Natural History. With its massive claws, the giant sloth might look menacing, but if it was as slow-moving as its modern cousin, then primitive man needn’t have worried.

Christopher Berinato is the author of Secret Savannah: A Guide to the Weird, Wonderful, and Obscure