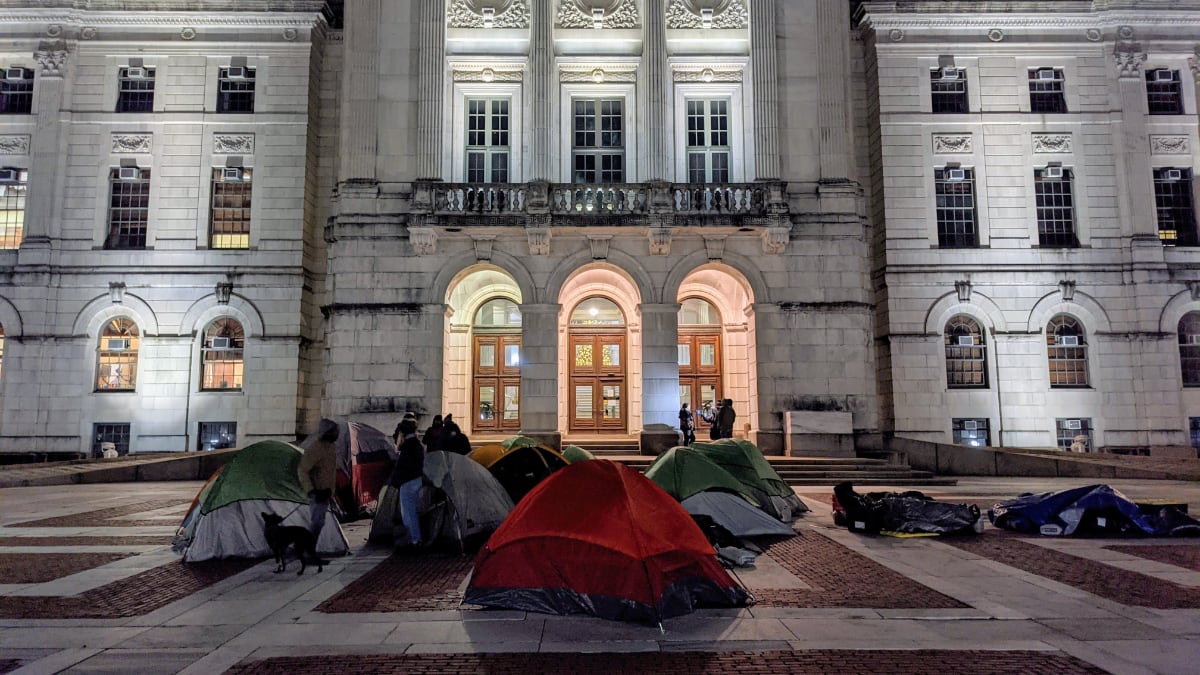 In Providence, RI, protesters have been sleeping in tents outside the State House since November 30.

State Senator Cynthia Mendes, who called for the protest, made her purpose clear: “I’m here because the state of Rhode Island has decided for another winter that some people should freeze to death.”

“The city has a lot of property,” said Terri Wright, an organizer with Direct Action for Rights and Equality. “Why do people still sleep outside? Why is there a process to get into a hotel bed? »

The protest drew local media coverage and community members dropped off food and supplies. It includes people who are currently or formerly homeless, homeless advocates, housing organizers and other concerned residents. Every day, the camp organizes a community meeting from 5 p.m. to 7 p.m. to offer people the opportunity to get to know each other, to organize themselves and to tell their stories. Everyone has their reasons for fighting.

Michelle Saint Pierre, who organizes direct aid with Wide Awake Providence, was out at the camp on December 3. His son Shane, who was kicked out of a shelter that day, also joined him. “They should use the full $1.1 billion [emergency fund] to open up these places where it’s needed, instead of just sitting on them,” he said.

Saint Pierre said the governor “should be out there, putting all these people in hotels, or whatever he has to do.”

“In my opinion,” she added, “he should do something with all these abandoned buildings, like the old Urban League. He should take advantage of it, make it another refuge, like when I was homeless.

Several protesters said it would only take 1% of the $1.1 billion emergency fund to provide hotel rooms for everyone currently sleeping away.

Nithin Paul, a family doctor who has been sleeping since December 2, is defending his homeless patients.

“There is a lot of mental trauma every day and then the body takes its toll. I have patients with arthritis, who literally can’t walk, who’ve broken their bodies sleeping on hard ground, and now they need surgery and they can’t get to surgery because surgery needs you to be able to rehabilitate well. And if you’re living homeless, the surgeon will say, “Well, I don’t think you can rehabilitate well.” Sorry, you can’t have the operation that I would have otherwise performed on you.

Mendes argued the action should have come weeks ago. The delays, she says, are due to greed, apathy and a lack of accountability by politicians. “They lack a sense of justice and compassion and what human dignity actually looks like,” she said. Release News. “And that’s why I strongly believe they have no place in the office.”

The Rents Rhode Island organizers provided hot food as support on the fifth night. Andira Ture of CTR RI said: “Nearly 4,000 evictions have been triggered, so the homelessness crisis will only get worse.

The camp protesters are determined to be active, taking the path of direct action. On the third day of the evening, about fifty people disturbed the Governor’s tree lighting ceremony on the other side of the Capitol building, demanding safe housing for all. One of the protesters, Monica Huertas, asked: “Hundreds of people are sleeping on the streets tonight. What would Jesus do?”

Currently, there are a dozen tents in front of the State House. Now, planning their next steps, protesters are determined to hold their ground. “We will be here until every Rhode Islander who is not sheltered gets shelter,” Wright said.

“They showed us who they are. Now we have to show them who we are,” Mendes said. “That’s the reason to come together; this is the reason to organize under this banner.

“As a woman of color, having to put my body on the line to demonstrate, that’s what we do. Cori Bush did it. Rosa Parks did it. They left me no choice.