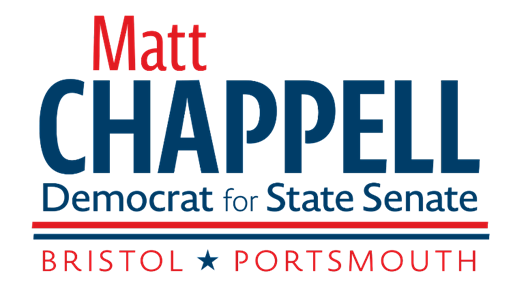 Matt Chappell announced today that he is a Democratic candidate for the Rhode Island Senate in District 11, which encompasses Portsmouth and parts of Bristol.

A fourth-generation Portsmouth resident, a press release from his campaign says Matt practices law at his family’s law firm, Chappell & Chappell, and is a solicitor for the towns of Tiverton and Portsmouth.

“I am running for State Senate to bring the East Bay experience and the voice of our community to the State House,” Chappell said in a statement. “Over the past few years, Senator Seney has been a sincere and effective voice on the issues that matter most to the residents of East Bay. As Senator Seney did during his tenure, I hope to provide accessible representation, strong government oversight, and be a leading voice advocating for all members of this community.

Matt graduated in 2009 from Portsmouth High School, where he played hockey, golf and football. He then attended Plymouth State University and Roger Williams University Law School in Bristol. As a third generation attorney, Matt is an active member of the Rhode Island and Newport County Bar Associations.

“Community service is something that is dear to my family, and its importance was instilled in my three sisters and me from a young age,” said Chappell, whose three sisters Kateri, Kelsi and Molly live. and raise all their families in Portsmouth. “My grandfather, father and uncle have dedicated their professional careers to providing residents of Portsmouth and East Bay with strong legal representation. They inspired me to choose a similar path after graduating from law school. From zoning issues to business issues and criminal prosecutions, I believe my legal background in researching and providing pragmatic solutions to issues facing the community will serve me well if elected to the State Senate.

As a prosecutor, Matt says he has handled hundreds of criminal cases and developed a unique perspective on the strengths and weaknesses of the state’s criminal justice system. Matt hopes to build on the reinvestment in justice initiatives passed by the General Assembly to ensure those affected by mental health conditions receive the necessary help and treatment.

“I see the real implications of the Rhode Island criminal code every day in the courtroom,” Chappell said. “Unfortunately, many of the people I interact with are not here because they chose a life of crime, but rather because of underlying mental health issues. We can and must do a better job of identification and treatment of these behaviors as a society.

If elected, Matt says he will also work to introduce legislation to pre-empt any US Supreme Court rulings aimed at undermining the rights of protected classes. In 2019, the General Assembly codified Roe v. Wade into state law, which will prove crucial if the Supreme Court overturns the landmark decision.

Matt says he loves living in Portsmouth and plans to raise his own family there. He says he personally took on the challenge of finding an affordable home in the East Bay and saw firsthand the challenges and gaps around education, affordable housing and aging in place.

“We must prioritize legislation that gives all generations the opportunity to buy an affordable home and find decent jobs,” Chappell said. “Too many of my friends in town couldn’t find a good job or an affordable place to live, so they had to move elsewhere. In addition, our seniors need more support to age in place and live their lives in place. Increasing our housing stock would help keep families together and make it easier to live, work and raise a family in the East Bay.

Chappell says he will spend the next few months knocking on doors and talking to voters in Bristol and Portsmouth about issues that matter to them. Matt’s entry into the race means there will be a Democratic primary on September 13e.

A graduate of Harvard and NYU School of Law, Ujifusa has served as a lawyer in private practice and with the US Environmental Protection Agency.

An island hopping to the south | Dungog Chronicle