By Dawn Ryan
0
0
Share:
Lac Lak largest freshwater lake in the Central Highlands, and the second in Vietnam after Ba Be Lake in Bac Kan (Photo: nhandan.vn)

Hanoi (VNA) – Lak Lake in Lien Son Township of Lak District can be reached by taking National Road 27 for about 55 km from downtown Buon Ma Thuot, which is the capital of Dak lak province of the central highlands.

It is the largest freshwater lake in the central highlands and the second in Vietnam after Ba Be Lake in northern Bac Kan province. With a total area of ​​around 6.2 m², the lake is 500 m above sea level.

Lak Lake is surrounded by mountains and hills, to be noted by the Chu Yang Sin in its upper part whose summit rises to 2,442 m above sea level. The mountain is home to virgin forests with a diversity of flora and wildlife. Therefore, Lak Lake hardly ever dries up, even in the dry season in the central highlands.

Looking from above, the water’s surface is vast and calm, and shows reflections of mountains and forests, creating a spectacular and picturesque landscape.

The lake is surrounded by expanding rice fields mingled with villages of the M’nong ethnic group that have existed for generations, which maintain the original charm of the central highlands.

The M’nong people retain many traditional traits and take care of 17 elephants, dubbed a symbol of the region.

Located on a dreamy hill next to the lake is a private mansion of King Bao Dai, the last king of the Nguyen dynasty which is also the last feudal dynasty of Vietnam. The king often stopped at the mansion with his family when he went to Buon Ma Thuot for hunting or recreation.

It is a three-story mansion that has been built in a modern architectural style, as all rooms have large windows looking out on all sides.

Lake Lake can be seen from the mansion, as well as ancient villages of the M’nong people stretching between forests and rice fields, adorning the beauty of the lake. 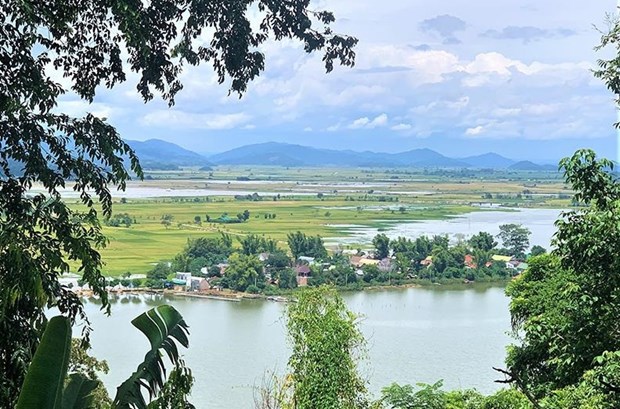 The lake has become a well-known tourist destination in Dak Lak in particular and the central highlands in general. A large number of domestic and foreign tourists visit the lake every year to enjoy its charm and learn about the cultural characteristics of the M’nong people.

This year, few visitors have come to the site due to the impacts of COVID-19, but the scenery and people’s lives remain peaceful and simple, with a tinge of mystery. /.